Maybe it is maturity. Maybe it’s the fact that I’m only a couple months removed from turning 40. But I’ve kind of found perspective.

There were times when I would let a bad break on the golf course really bother me. Now I’m not going to say I’m thrilled if I drive it into a divot or have one bounce off of a sprinkler head into some less than awesome spot. But I also realize that sometimes things do even out.

How do I know that? Well, here are some examples.

On Thursday, I hit an approach shot into an up pin on a par 5. I didn’t quite get all of it. The ball landed short of the green. Instead of bouncing forward, the ball must have landed just on a slope and it kicked into a greenside bunker.

I wasn’t all that disappointed. I didn’t make a great shot. I figured I’d still have a chance to get it up-and-down and save par. But then I walked up to the green and there was no ball at the bottom of the bunker. After some close observation, we found this: 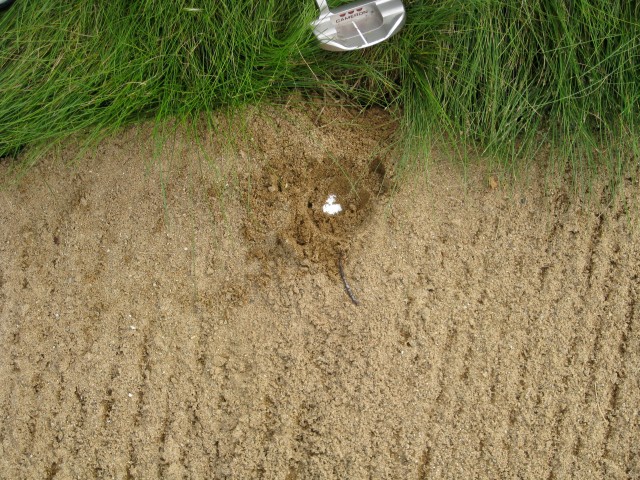 How the ball ended up there — under the lip and totally buried — on a bounce into the bunker is beyond me. The good news is that I did get the ball out of the bunker on the first attempt. I ended up on the fringe and made a bogey. It could have been worse.

One day later, I had an entirely different experience.

Well, guess what I did? Yep, jumped on a mid-iron and hooked it into the bunker. For good measure, I short-sided myself as well.

When I got to my ball, this is pretty much what it looked like:

Standing in the bunker, I could see the flag and a tiny bit of the flagstick. I couldn’t dream of actually seeing the putting surface. Because I’m not the greatest bunker player (though I have made some progress in that world this year), my only goal was to not have it hit the lip/bank and roll back into the bunker. I just wanted to get it somewhere on the putting surface and was very content to make a bogey 4 and move on with my life.

I opened the face on my 58 degree wedge and hit a good bunker shot. I tossed the ball up in the air, got it to clear the lip and figured it was on the green. I hit it well enough that I thought I’d at least have a run at a par. After getting out of the bunker and raking up my mess I climbed up to the green and didn’t see a ball.

I knew there was no way the ball was over the green. I hit too good of a shot for that. Where was it? Yep, it was here:

I’d love to describe in pretty words exactly how the ball landed, took the break and just crawled over the lip of the cup, but I can’t. I have absolutely zero idea how the ball ended up there. It’s pretty much as big of a mystery as to how the shot the day before buried under the lip of the bunker.

2 thoughts on “Maybe the breaks do all even out”